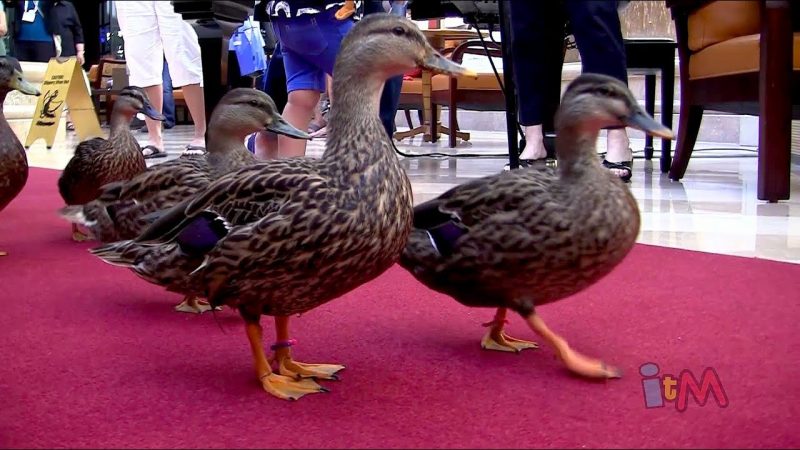 At the luxury Peabody Hotel in Memphis, it doesn’t matter who one knows, anyone who doesn’t have webbed feet and feathers isn’t allowed to stay in the sweetest suite.

The best room is reserved year-round for the famous Peabody Hotel’s marching ducks. Living a life of red carpets, velvet ropes, rooftop pools, and sweeping views of the Mississippi, the five North American mallards know how to work a room.

One of the top attractions in Memphis, Tennessee, every day at 11am these supermodels with beaks leave their penthouse Duck Palace and prepare for the onslaught of tourist flashbulbs.

The Peabody Ducks and Their Rooftop Duck Palace

After descending to the ground floor in a glass elevator, they waddle the red carpet to take their place in the hotel lobby fountain. The ducks spend the day greeting their fans, then at 5pm they clock off, and as the Duck Master clears their path with velvet ropes they wipe their feet on the red carpet, head back to the elevator and retire to the rooftop.

There they spend the night in the 288 square foot Duck Palace. Built in 2008 to celebrate the 75th anniversary of the Peabody Ducks, the Duck Palace features a 24-foot glass viewing panel, sun deck, ceiling fans, overhead lighting, and a replica of the Peabody Hotel for the ducks to sleep in.

The $200,000 Duck Palace is open to the public from 8am to 10pm daily and replaces their previous, Camelot themed, accommodation.

The tradition of the Peabody Ducks started with what is usually not a good mix; guns and alcohol.

In 1933 the General Manager of the hotel, Frank Schutt, and his friend Chip Barwick had too much to drink after a hunting trip and decided to put their live duck decoys in the hotel’s fountain.

People reacted so well to the sight of the three small English call ducks swimming around in the foyer that they were soon replaced by five North American Mallards.

In 1940, former circus animal trainer, Bellman Edward Pembroke, taught the ducks how to make their own way into the fountain, and became the first Peabody Duck Master.

Mr. Pembroke served as Duck Master for 50 years until his retirement in 1991. Today Duck Master Jason Sensat leads the mallards in the daily Duck March.

The hotel’s feathered ambassadors have become national celebrities over the years, appearing on The Oprah Winfrey Show and Sesame Street, in People Magazine and joining the other supermodels in the Sports Illustrated Swimsuit Issue.

No Duck On The Menu at The Peabody Hotel

While Duck Masters may stay for years, the career of a Peabody Duck is short. They only live in the hotel for three months before they are returned to a farm to live the rest of their life in the wild, telling tales of bright lights in the big city.

The Peabody Hotel is quick to point out that no duck, regardless of whether it has lived in the Duck Palace, has appeared in the hotel’s restaurant since 1981.

It’s believed Chez Philippe may be the only French restaurant that does not serve duck.

One of the more unusual hotel guests a tourist can expect to meet, the Peabody Ducks deserve a spot on the Memphis To-Do list, alongside Graceland, Sun Studio, and the National Civil Rights Museum.