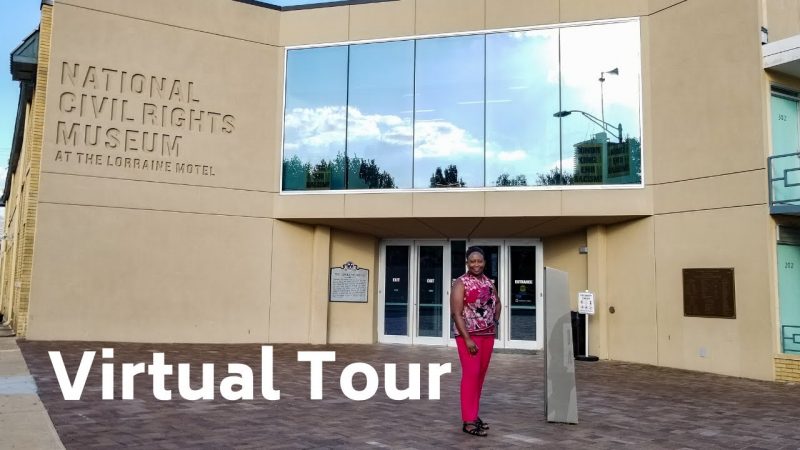 The National Civil Rights Museum is built on the site of the Lorraine Motel where Dr. Martin Luther King, Jr. was assassinated.  This location in Memphis brought national attention to the situation facing the civil rights movement when on April 4, 1968, the leader of the movement was shot in front of a crowd gathered to hear him speak.

The Museum exists to assist the people of the world to understand the Civil Rights Movement and its impact and influence on human rights movements worldwide.  There are collections, exhibits, there is research, and educational programs all waiting to help you understand the past and prepare for the future.  The Museum has information beginning in 1619 and going all the way to 2000 with historical exhibits, including Room 306 which is the room Dr. Kind stayed in April of 1968.

Not only is this a place that you will want to visit while in Memphis but it is also a learning resource for teachers, students, and the general public.  Here you will find information on civil and human rights organizations around the world and a bibliography of youth literature.

The Museum presents a timeline of the civil rights struggle relating to African Americans and concentrating on the seminal events of the 1950s and 1960s.  Exhibits include Montgomery Bus Boycott; Brown vs. Board of Topeka; Little Rock; The March on Washington; Freedom Movement; March from Selma to Montgomery; Memphis Sanitation Workers Strike; and An American Legacy through the year 2000.

“Exploring the Legacy” the $11 million dollar expansion opened in 2002, is housed in the building where James Earl Ray allegedly fired the shot that killed Dr. King and includes never before seen evidence surrounding the assassination on exhibit.

The Museum is accredited by the American Association of Museums.

The Museum starts with the information from 1619 – 1865 when African-Americans stove to gain full participation in political, economic, and social life in the United States.  With the coming of the Civil War the focus on the slave issues was brought to national attention.  Moving forward to 1865-1910 you will learn about the 4 million-plus slaves that were freed as a result of the Emancipation Proclamation and the North having won the Civil War.  This didn’t end the discrimination though.  Black codes and Jim Crow laws emerged following the war as a way to keep former slaves inferior to the white man.  The US Supreme Court mandated “separate but equal” accommodations and the newly founded NAACP used the Constitutional laws to fight this discrimination.

From 1940 to 1955 you will learn about the 1954 murder of 14-year-old Emmitt Till and numerous lynchings that sparked protests.  The African-Americans began economic boycotts, sought legal redress against segregated educational facilities, planned a demonstration march on the nation’s Capitol, organized voter registration drives and sit-ins attended grassroots organizing workshops, and sought an end to military discrimination.  These actions were far more aggressive against the lack of equality than those that had gone on previously.

By 1910 the fight for rights was supported by the formation of organizations such as the NAACP; Marcus Garvey’s Pan African movement sought to achieve freedom and equality and an end to white racism; A. Philip Randolph organized the Brotherhood of Sleeping Car Porters to aid beleaguered black and disenfranchised railway workers; Oscar DePriest organized a successful campaign to win election to the House of Representatives in 1928 and, in 1934, the Nation of Islam emerged as a fusion of political and religious teachings aimed at empowering blacks to practice economic self-reliance and increase racial pride.

Brown v. Board of Education (1954-1955): The landmark decision to end legalized segregation under “separate but equal” is a triumph for the NAACP and African Americans. Though the decision did not provide the actual means to secure equal educational opportunities, it set a precedent that would be used to dismantle segregation wherever it existed.

Then there was Rosa Parks in 1955.  She defied the city’s segregation bus transport style and would not give up her seat and move to the back of the bus.  Her defiance leads to a citywide non-violent boycott by the city’s African American population. The boycott led by 26 year- old Dr. Martin Luther King, Jr., was settled after 381 days of protest and, led to the formation of the Southern Christian Leadership Conference (SCLC).

In 1960 four African American college students in Greensboro, NC staged a sit-in protest after being denied service at Woolworth’s lunch counter.  This sit-in grew to include hundreds of black and white students sitting in at restaurants across the country.

The story goes on and on and you will be able to learn all the different pieces that made the Civil Rights Movement so critical to the changing of the United States and the world when you visit the National Civil Rights Museum in Memphis.

Elvis Presley’s Graceland may be the best-known tourist attraction in Memphis, Tennessee, but the National Civil Rights Museum is the most powerful.

Built around the Lorraine Motel where Dr. King was assassinated, the National Civil Rights Museum takes visitors on a chronological journey through key episodes in the American civil rights movement.

The exhibits walk visitors through the struggle for civil rights from slavery to the assassination of Dr. King in 1968 and beyond. Visitors are taken through a series of audiovisual and interactive displays, which explain some of the most important moments in civil rights history in a way that captures the imagination and leaves a lasting impression.

Interactive sections of the museum include boarding an old bus and being told to sit at the back as African Americans were forced to do during segregation. Visitors can also take in replicas of the Edmund Pettus Bridge in Selma, Alabama, the site of the infamous “Bloody Sunday” conflict in 1965, and Dr King’s Birmingham jail cell. From there the walk along the civil rights timeline ends with Dr King’s final hours.

Audio and video recordings of people talking about Dr King’s final night at the Mason Temple on April 3rd, and clips of his “I’ve been to the mountaintop” address, send shivers down the spine and give visitors an incredible insight into that historic night.

Visitors are then able to look into Room 306 at the Lorraine Motel, which looks just as it did the day Dr King was murdered. Dr King stayed in Room 306 so often it was known as the ‘King-Abernathy suite’.

Reverend Ralph Abernathy was a close friend and colleague of Dr. King’s who was present at the assassination. It was while he was standing on the Lorraine Motel’s second-floor balcony that Dr King was shot, at 6:01 p.m. April 4, 1968.

The Lorraine Motel remained open following Dr King’s assassination but plunged into a long and steep decline. The motel’s owner, Walter Lane Bailey, kept two rooms – Room 306 and Room 307 – as a shrine to Dr King. Amid fears the historic site would be destroyed, a group of prominent Memphis citizens banded together to buy the site and in 1991 the National Civil Rights Museum was officially opened to the public.

In 2001 the museum expanded to include the former rooming house across the road, where James Earl Ray fired the shots that killed Dr King. The tour ends with visitors standing at the window where the fatal shots were fired from, looking down to the Lorraine Hotel and the spot where Dr King was killed.

The Protester at the National Civil Rights Museum

Millions of tourists have been intrigued by the protester on the sidewalk in front of the National Civil Rights Museum.

The protester’s name is Jacqueline Smith and she was the Lorraine Motel’s last resident. Smith moved into the motel in 1973, barricaded herself in her room and had to be evicted.

She has protested the museum since ground was broken in 1987, and since 1988 has maintained a protest vigil nearly 21 hours a day. Museum spokespeople say she has never been inside.

The museum is located in downtown Memphis at 450 Mulberry Street. The museum’s website has directions to the National Civil Rights Museum.

The National Civil Rights Museum is closed on Tuesdays.

It is open from 9am to 5pm Monday to Saturday and 1pm to 5pm Sunday in winter.

It is open from 9am to 6pm Monday to Saturday and 1pm to 6pm Sunday in summer.

Tennessee state residents with identification can visit for free on Mondays between 3pm and 5pm. This does not apply to tour groups and operators and is not valid during holidays and special events.

While in Memphis, visitors may also want to visit Graceland, Sun Studio, watch the Peabody Hotel Ducks march down the red carpet and soak up the atmosphere in Beale Street.