Sun Studio – A Must for Any Memphis Vacation

Home /Featured/Sun Studio – A Must for Any Memphis Vacation 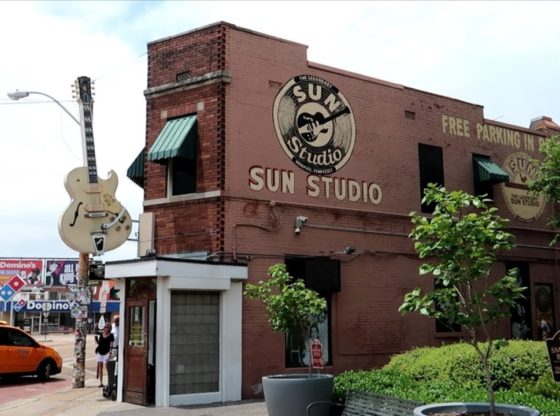 No visit to Memphis is complete without visiting the historic Sun Studio, where Elvis Presley, Jerry Lee Lewis, Johnny Cash, U2 and many more have recorded iconic tracks.

Stepping across the threshold into Sun Studio can be an incredible moment for rock and roll fans. To know that they are in the very studio where Elvis Presley first stepped up to a microphone, where Jerry Lee Lewis rocked out with Whole Lot of Shakin' Goin' On and where U2’s Angel of Harlem was brought to life.

The Sun Studio building is so modest that it’s possible to drive past without realizing what took place behind those brick walls. To enter the museum visitors walk through the café where Sun Studio owner Sam Phillips once held business meetings, and it’s easy to start dreaming about the rock and roll legends that once sat in those booths.

Dressed in fifties rock and roll attire, the friendly – and stylish – guides take visitors through the history of the studio, and of rock and roll itself. With the kind of enthusiasm that makes it hard to believe they tell the same stories day in day out, they share fascinating stories and music trivia.

Visitors can step into the spot where Elvis recorded his first five singles, marked clearly with the cross Sam Phillips made out of electrical tape more than 50 years ago. They’re taught about the history of classic songs, such as Hound Dog, as guides explain how Big Mama Thornton originally recorded it in Blues style in 1953, pointing out that the lyrics were clearly written for a woman.

The guides share stories about the day in December 1956 when Elvis came back to visit the studio and held the spontaneous Million Dollar Quartet session with Carl Perkins, Johnny Cash, and Jerry Lee Lewis. They share the way Jerry Lee Lewis recorded Whole Lot of Shakin’ Goin’ On in just one take and tell stories about other greats in Sun Studio, including Roy Orbison, BB King, Howlin’ Wolf, Junior Parker, Rufus Thomas, and Little Milton.

Opened by rock pioneer Sam Phillips in January 1950, Sun Studio was originally called the Memphis Recording Service and found in the same building as Sun Records.

As the Sun Studio guides explain, “Sun Studio was born to capture the pure raw energy of Beale Street.” They say the sound we now know as Rock and Roll were created thanks to a series of wonderful mistakes made by Sam Phillips.

Self-taught Phillips used so much echo that a three-piece band sounded like an all-night party. He would crank the amp up so high that it distorted, and according to the Sun Studio official website, “He didn’t know to blend the musical styles – or that it wasn’t supposed to be sheer passion and fun!”

The First Rock and Roll Song Recorded at Sun Studio

In March 1951, Rocket 88 was recorded in Sun Studio. The song, which is widely credited as being the first rock and roll song in history, was released by “Jackie Brenston and his Delta Cats” with Ike Turner playing the piano. Rocket 88 went to number one in June 1951 and the rock and roll sound was born.

Sun Records outgrew the small Union Avenue studios in 1959 when Sam Phillips opened larger studios on Madison Avenue, Memphis, which became known as Phillips Recording. In 1987 the studio was brought back to life, and artists like U2, Paul Simon, and Ringo Starr recorded tracks in the legendary space. Sun Studio continues to be a recording studio to this day.

Sun Studio Tours are a Must for Any Memphis Vacation

Sun Studio is found at 706 Union Avenue, Memphis, Tennessee. Tours are conducted daily from 10.30am to 5.30pm. Visitors can take advantage of the free shuttle to and from Graceland.

Tours cost $12 for adults and are complimentary for children aged 5-11. The official Sun Studio website explains that children under 5 are not permitted “due to the personal nature of our tour performance”.

Read more at Suite101: Sun Studio, Memphis, Birthplace of Rock and Roll: Legendary Recording Studio a Must for Any Memphis Vacation http://tennessee-travel.suite101.com/article.cfm/sun_studio_memphis_birthplace_of_rock_and_roll#ixzz0bgQ0fgKL

Sun Studio may be full of history, but it's more than a Rock and Roll museum. Today artists still leap at the chance to record new tracks in the historic studio.

Sun Studio, Memphis, was opened by rock pioneer Sam Phillips in 1950, and quickly earned a place in music history. It was home to Elvis Presley’s first recordings, the place where the first Rock and Roll song, Jackie Brenston’s Rocket 88, was laid down, and the studio where greats such as Jerry Lee Lewis, Johnny Cash, Carl Perkins, BB King, and many, many more, stepped up to the microphone.

When Sun Records outgrew the small Sun Studio space in 1959, Sam Phillips opened larger studios on Madison Avenue, Memphis, which became known as Phillips Recording. All recordings stopped at Sun Studio in 1969 when Phillips sold the label to Shelby Singleton. But it wasn’t to be the end.

In 1985, legends Carl Perkins, Roy Orbison, Jerry Lee Lewis, and Johnny Cash returned to Sun Studio to record the Class of 55 sessions. Then in 1987, the studio was brought back to life.

U2 Stepped into Sun Studio History with Rattle and Hum

When the Studio was reopened, greats such as Paul Simon and Ringo Starr headed for Memphis to record in the historic space. U2 also made the journey and documented the experience in their Rattle and Hum movie.

U2 recorded Angel of Harlem When Love Comes to Town and Love Rescue Me at Sun Studio. To add to the experience and give the songs that special Sun Studio sound, they enlisted the help of producer “Cowboy” Jack Clement, who produced tracks by Elvis, Johnny Cash, Jerry Lee Lewis, Carl Perkins, and more in the early Sun Studio days.

Angel of Harlem went on to become one of the biggest selling singles recorded at Sun Studios. The console U2 used to record their Rattle and Hum tracks is part of the museum and is one of the more popular items on display.

Artists Continue to Record at the Legendary Sun Studio, Memphis

Sun Studio continues to be a working recording studio to this day. In 2009, John Mellencamp and Canadian Blues artist JW-Jones were just two of the artists who recorded tracks for their new albums in the famous studios.

John Mellencamp followed his Sun Studio heroes’ example and recorded his tracks live and in mono, just as Sam Phillips did with the Sun legends in the 1950s. Mellencamp told Rolling Stone magazine he and his producer laughed when they realized they had recorded five tracks in one night – compared to spending days working on a drum sound in the seventies and eighties.

Sun Studio Tours are a Must for Any Memphis Vacation

Sun Studio boasts an incredible history and offers fascinating tours that are a must for any Memphis vacation.

Sun Studio is found at 706 Union Avenue, Memphis, Tennessee. Tours are conducted daily from 10.30 am to 5.30 pm. Visitors can take advantage of the free shuttle to and from Graceland.

Tours cost $12 for adults and are complimentary for children aged 5-11. The official Sun Studio website explains that children under 5 are not permitted “due to the personal nature of our tour performance”.