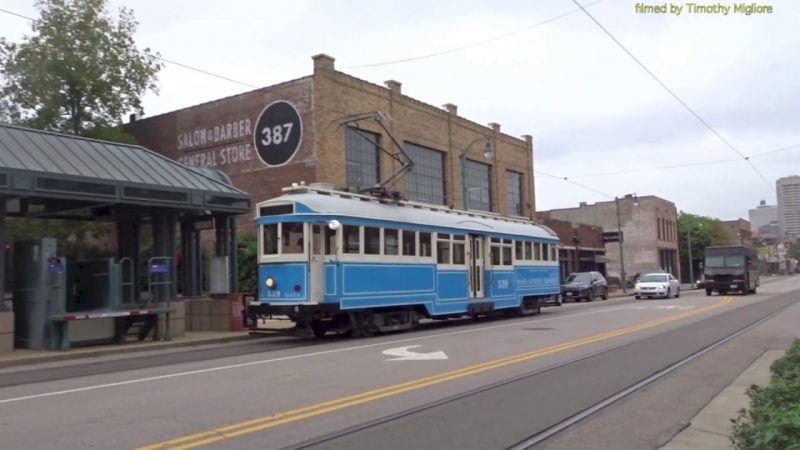 The trolleys used are almost all restored, vintage streetcars. The original three cars in operation on opening day were all formerly used in Porto, Portugal, and are Car 187, circa 1927; Car 194, circa 1935; and Car 204, circa 1940. These cars are each 30 feet 6 inches (9.3 m) long, 7 feet 10 inches (2.39 m) wide and weigh 25,820 pounds (11,710 kg) without passengers. The cars were restored by Kerns-Wilcheck Associates of Memphis. Three additional ex-Porto cars (156, 164 and 180) joined them within weeks, and the fleet had six cars (all ex-Porto single-truckers) by May 1993.
`
Between the mid-1990s and 2003, the fleet expanded considerably in both number and capacity with the arrival of ten reconditioned Melbourne, Australia W2-class cars, all but one (Car 417) supplied by Gomaco Trolley Company. Other additions were single-truck Car 1979 that was built new by Gomaco in 1993, as a demonstrator; double-truck Car 1794 that was originally an open-sided car from Rio de Janeiro, Brazil, but was heavily rebuilt and enclosed before entering service in Memphis, and, in early 2004, a replica Birney Safety Car – again, manufactured by Gomaco, similar to those used on the TECO Line Streetcar System in Tampa, Florida and the Metro Streetcar in Little Rock, Arkansas.
–
The fleet and overhead wires were converted from trolley pole to pantograph current collection in early 2003, during a three-month suspension of service which started on January 5, 2003.

An eleventh reconditioned Melbourne car, W5-class 799, was purchased in 2006 by MATA with a view toward eventual restarting of trolley service. ~Wikipedia
–
Thank you for your support. Comment below so all of us can have a productive and insightful conversation about transportation!