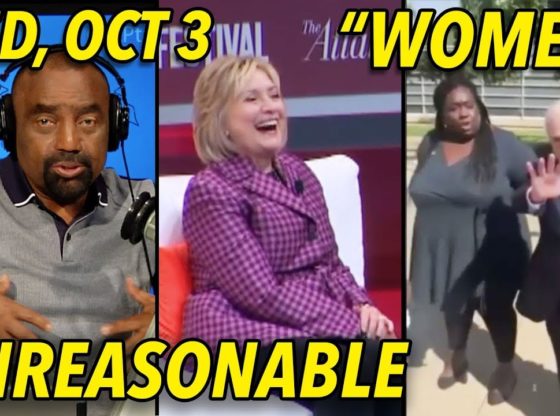 | 3) The Fallen State preview with involuntary celibate. Hillary Clinton flashback: What difference at this point does it make! Curtis of Virginia: Have you dealt with unreasonable people? He doesn’t remember.

| 5) A guy yells at Jesse about thinking the judge is lying, and not Ford. He calls Jesse illiterate and asks if Jesse thinks the white man Trump cares about him. Yes, because he’s making my country great again. He says Kavanaugh said he just had one beer — but the caller is lying!

Wed, Oct 3 Hour 2: If you have anger, how can you go to heaven? Paid protestors vs RINOs!
| 1) These are desperate times. CJ of Memphis, TN, answers Biblical Question about going to heaven. They talk about Republicans, RINOs and Democrats. Can Democrats be convinced they’re wrong? Just tell the truth. How do you stay so calm in talking to irrational people? Have you overcome your anger? How do you know you’re going to heaven then? He decides he has overcome his anger. How? That’s a complicated question. He’s accepted people are unreasonable. Amazing!

| 2) Chris of Martinsville, IN, says last call he stuck up for black workers, that whites are turning more lazy, and blacks are coming out of their suppression. He talks about other stuff.

Sharon of Nashville, TN, talks about the “believe women” nonsense.

| 3) The Fallen State trailer with the incel – men who are virgins by force, not by choice!

| 4) Republican Senators David Purdue and Bob Corker harassed by paid protestors, including a fat one! Nobody want you!

| 5) Jesse forgot to get back to Sharon! Have you ever done the Mashed Potato dance? She was raped at 21. Somebody put something in her beer. Noo, she does not believe the Ford woman. Jesse holds her over to 3rd hour.

Wed, Oct 3 Hour 3: Caller was raped: Don’t believe Ford! Pro-choice man kicks pro-life woman
| 1) Sharon of Nashville, TN, from 2nd hour, was 21 when she was sexually assaulted or raped. She grayed out as the man led her to a hotel room. She couldn’t have children. Her husband died of cancer. She says I think he was a beta male. She went to a Christian counselor. She’s mad about the Christine Blasey Ford. We’ll have to go mashed potato sometime.

| 3) Skip of Augusta, GA, talks about his early life, bringing 8-10 Pabst Blue Ribbon beers to his adoptive daddy in the basement every night, hiding it from his adoptive mama.

| 4) Skip says people say that others are in heaven just to comfort them, lying. He knows it ain’t right. Satan knows how to get in church doors too.

Robert of Delaware reads from Matthew 22.

| 5) Robert will call back tomorrow 10am ET. Jody says he forgave his parents — call back!