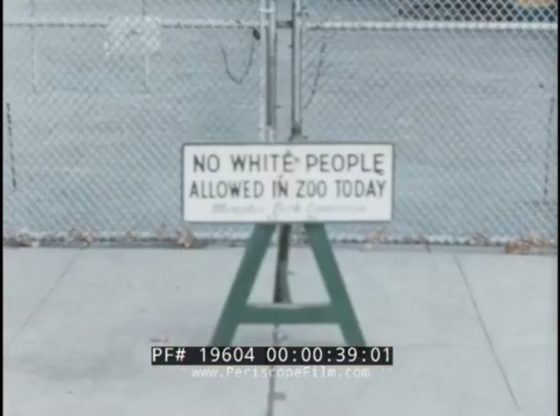 Want to support this channel and help us preserve old films? Visit https://www.patreon.com/PeriscopeFilm
Browse our products on Amazon: https://amzn.to/2YILTSD

This silent 16mm home movie shows a trip to the American South in the year 1957. What’s interesting about the film is that the filmmaker must have been interested in the Civil Rights movement. He shot footage of the segregation era signage at the Memphis, Tennessee Zoo (:37). It may shock some viewers to understand that in this era, even visits to the zoo were segregated. Blacks could visit the zoo on Thursdays, while whites could go on the other week days including the weekends. He also filmed the Central High School Building in Little Rock, Arkansas (1:36) which looms large in the desegregation of schools.

The film starts with shots of the Mammoth Cave, located in Kentucky. At :34 is the Memphis Zoo entrance and signage. At :45 a bridge on what appears to be Highway 79 is visible. Shots thru the car windshield of the highway and from the passenger window of shacks and homes. At 1:08 is an institutional building which appears to be Central High School in Little Rock, Arkansas.. At 1:26 a military jeep drives by, possibly National Guard Troops there to enforce the school’s integration. At 1:36 is Central High School again. In the fall of 1957 Little Rock became the symbol of state resistance to school desegregation. Arkansas Governor Orval E. Faubus directly questioned the sanctity of the federal court system and the authority of the United States Supreme Court’s desegregation ruling while nine African-American high school students sought an education at the all-white Little Rock Central High School. At 1:42 are shots of the Arkansas State Capitol Building. At 1:56 is the Arkansas Governor’s Mansion.

We encourage viewers to add comments and, especially, to provide additional information about our videos by adding a comment! See something interesting? Tell people what it is and what they can see by writing something for example: “01:00:12:00 — President Roosevelt is seen meeting with Winston Churchill at the Quebec Conference.”

This film is part of the Periscope Film LLC archive, one of the largest historic military, transportation, and aviation stock footage collections in the USA. Entirely film backed, this material is available for licensing in 24p HD, 2k and 4k. For more information visit http://www.PeriscopeFilm.com