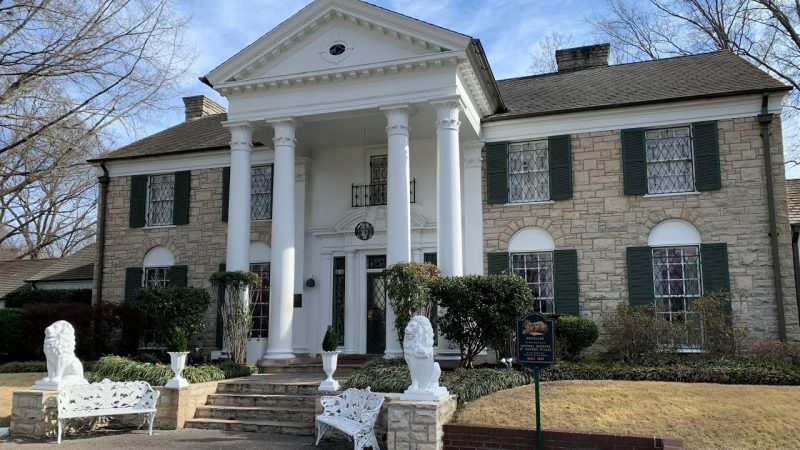 One of the best-known tourist attractions in the United States, Elvis Presley’s Graceland in Memphis, Tennessee is a once in a lifetime experience.

The 14-acre estate features the mansion that was home to Elvis from 1957 until his death in 1977, as well as an Elvis Presley Museum, stables, and Elvis’ final resting place in the Meditation Garden.

Since opening its doors to the public, Graceland has fascinated millions regardless of whether visitors know The King’s entire back catalog, or are simply tourists with an appreciation of all things kitsch.

Visit Graceland, Home of the King.  Listed on the National Register of Historic Places in 1991, Graceland is the final resting place of Elvis Presley, the King of Rock and Roll. The beautiful white-columned mansion sits on a 13.8-acre estate and is one of the most visited tourist destinations in the United States – the second most visited residence after the White House. In fact, many fans of Elvis make an annual pilgrimage to the site to pay their respects.

Visitors to Graceland will find quite a few interesting things to see. It offers people an opportunity to get close to one of the most beloved artists of all time. You might be amazed at all of the wonderful things you can do.

You get to see Graceland the way Elvis did, in all its eclectic glory. You can take an audio-guided tour that features stories told by Lisa Marie as well as Elvis. You get to see the living room, the music room, the dining room, the kitchen, the TV room, the pool room, and even the famous jungle room. You can also see the racquetball building and his office.

Another part of the mansion tour that everyone seems to love is the trophy building. Here you can see a number of interesting artifacts and memorabilia, including Elvis’s gold and platinum records, costumes, jewelry, photos, and more.

The final stop of the mansion tour ends with a trip to the Meditation Garden. You can see the graves of Elvis and his family members there.

The mansion tour lasts between 60 and 90 minutes depending on how fast you want to go and is available in the following languages: English, German, Italian, French, Japanese, Portuguese, Spanish, and Dutch.

But there is still a lot left to see at Graceland!

At this one-of-a-kind car museum, you will see more than thirty of Elvis’s favorite vehicles. Included are some Harley Davidson motorcycles, a 1956 Cadillac Eldorado convertible, and the famous Pink Cadillac. Also located here are two Elvis-themed racecars from 1998 – the Elvis NASCAR and the Elvis funny car.

You don’t want to miss this! Step inside two of Elvis’s custom jets. Walkthrough the “Lisa Marie” and check out the living room, seatbelts with gold plated buckles, and leather-covered tables. Next, you can see his smaller Lockheed Jet Star, which has a customized yellow and green interior.

This is a free exhibit that is located at Graceland Crossing. It provides visitors with an insight into Elvis’s 1968 television special. You can see videos, photographs, and even some of Elvis’s outfits from the show.

The white-columned mansion seems almost modest from the outside, but once visitors have crossed Graceland’s threshold, there is no doubt they have stepped into something extraordinary. More than 30 years after his death, Graceland has been preserved as a kind of time capsule to give visitors an insight into what life was like when Elvis was King.

The upstairs level is closed to tourists, just as it was out of bounds for anyone who visited Elvis when he was alive. Elvis insisted on keeping the rooms upstairs private, so when Graceland opened to the public Priscilla and Lisa Marie Presley decided it would be disrespectful to allow anyone to go upstairs.

That said, the ground floor and basement level are more than enough to satisfy visitors’ curiosity. The ground floor features Elvis’ music room and living room, with its colorful peacock stained glass windows. From there visitors can see Elvis’ parents’ bedroom, then the dining room and kitchen.

Graceland becomes even more fascinating as visitors step downstairs into the basement. It is here they can see the TV room where Elvis would watch three television sets at once, and his bar and billiard room. From there, visitors walk back upstairs to see the extraordinary Jungle Room.

It’s said the Jungle Room was Elvis’ favorite room in the house. Legend has it that Elvis walked into a Memphis furniture store and within half an hour he had bought every piece of furniture that reminded him of Hawaii.

Pictures of The Jungle Room never seem to do it justice, and there’s a lot to be said for seeing it up close and personal. As some fans put it, in the Jungle Room you can feel Elvis’ presence. It’s the room that feels like home.

After leaving the Jungle Room, visitors walk outside and into the Trophy Room, where Elvis’ gold records, Grammy awards, movie posters, and memorabilia are housed along with a range of his costumes. From his movie costumes and sequined jumpsuits to his wedding tuxedo, the clothes Elvis wore provide a glimpse into the incredible life he led.

Visitors are then able to visit Elvis’ stables, the most recent addition to the Graceland tours. The stables had been kept off-limits, with Priscilla Presley telling USA Today they felt like the last place on the property that still felt like home. However, in May 2009 the stables became the first new area to be opened on the estate since 1998.

Elvis Presley was originally buried in Forest Hill Cemetery, Memphis. His grave was later exhumed and moved to Graceland, along with his mother’s grave and her original headstone, after Elvis’ tomb was tampered with.

Elvis’s final resting place is now in the Meditation Gardens at Graceland. The gardens were designed and built by architect Bernard Grenadier and were known as one of Elvis’ favorite places to spend time. It is said that he would often go to the gardens when he needed to think over any problems in his life.

When To Visit Graceland

Graceland was opened to the public in 1982 and declared a National Historic Landmark in 2006.

The two busiest times at Graceland are the annual Elvis Week Celebrations every August, and Elvis Presley’s birthday celebrations in January. For those who prefer to avoid crowds, it’s best to avoid such peak periods. Those who would like to take advantage of the extra Elvis events around the celebrations should book early to avoid disappointment. 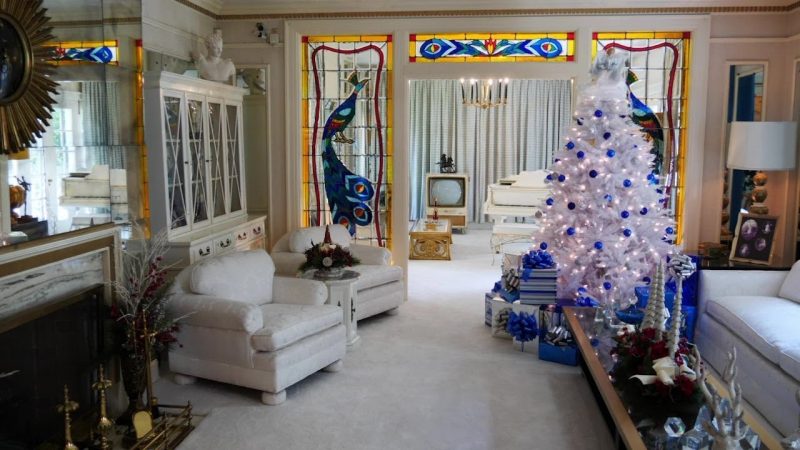 One of the most spectacular times to visit in winter is during the Christmas Celebrations when the interior and exterior of Graceland is decorated with Christmas decorations and a life-size nativity scene from Elvis’ own collection.

As well as Graceland and the nearby Graceland Automobile Museum, there are a number of great things to see and do in Memphis, including Sun Studios, The National Civil Rights Museum, Beale Street, and the Peabody Hotel Ducks.

For those who want to take their Elvis experience to the next level, the Heartbreak Hotel is across the road from Graceland and offers Elvis themed rooms

To Buy Tickets to Graceland visit Graceland’s Official Website. It is also possible to book private after-hours tours of the Graceland Mansion for groups of 50 or more.