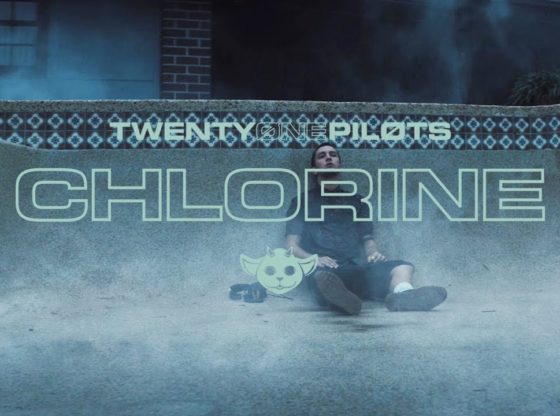 official video for “Chlorine” from the album ‘TRENCH’ – available now on Fueled By Ramen.
http://top.lnk.to/trench

Banditø Tour
get tickets at http://twentyonepilots.com/banditotour

Loving what I’m tasting,
Venom on my tongue,
Dependent at times.
Poisonous vibrations,
Help my body run,
I’m running for my life.

Fall out of formation,
I plan my escape,
From walls they confined.
Rebel red carnation,
Grows while I decay,
I’m running for my life.

Hide you in my coat pocket,
Where I kept my rebel red,
I felt I was invincible,
You wrapped around my head,
Now different lives I lead,
My body lives on lead,
The last two lines may read,
Incorrect until said,
The lead is terrible in flavor,
But now you double as a paper maker,
I despise you sometimes,
I love to hate the fight,
And you in my life is like…

I’m so sorry I forgot you,
Let me catch you up to speed,
I’ve been tested like the ends of,
A weathered flag that’s by the sea.
Can you build my house with pieces?
I’m just a chemical.