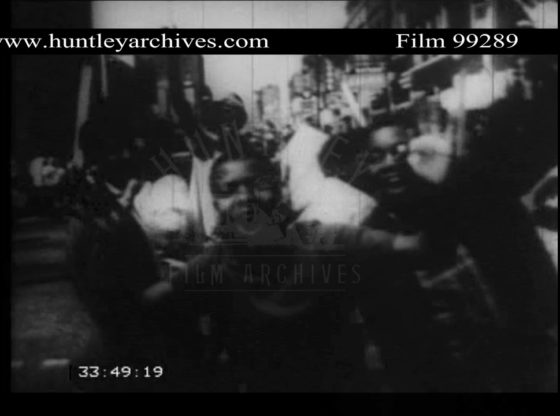 Memphis, Tennessee, U.S.A. 1968
Outside Memphis, Tennessee City Hall? Zoom out on entrance, some people standing on the steps. Police on motorcycle outside entrance take off. Officers in streets. King and massive crowd fill street to support sanitation workers, and fight for first amendment rights. King walking arm in arm with others. Police wait patiently in street. Officers with gas masks. Journalists reporting on front line. Chaos – police shoving people back or to somewhere else. Tons of people in the street, policeman stands on top of a car and he looks like he’s telling people to stop? Group of black men walk past the cameraman, and they start smiling and waving. Police directing running people. Someone’s thrown a mannequin into the crowd and it’s shown on the ground. Officers running. Tear gas in the background. Sounds like more tear gas being shot. Young police officer sitting on sidewalk being tended to. Officer(?) running down with a rifle. Siren going off in background. Bloodied Black man being led off, not sure to where. Officers beating someone on the ground. Pushing people into police van.