I drove through downtown Knoxville, Tennessee. This is what I saw.

Home /Memphis Films & Theatres/I drove through downtown Knoxville, Tennessee. This is what I saw. 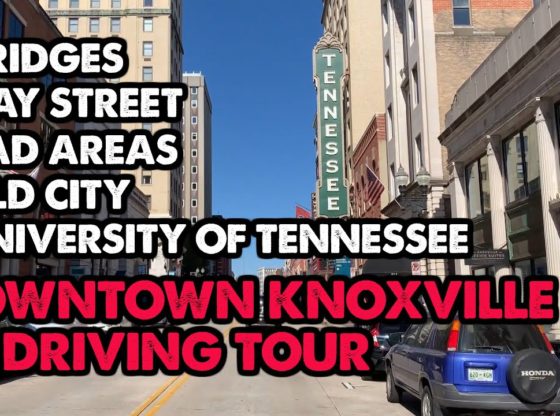 Wow so Knoxville is sneaky cool and fun. Who would have thought?

Okay so on this road trip of Knoxville, we’re going to bounce around a little bit instead of doing our Knoxville city tour in one continuous drive like we normally do. Right now, we’re just outside of campus at the University of Tennessee, which begins just outside of the downtown area. We’re on Cumberland Avenue, heading east towards downtown.

We’re on the very southern edge of downtown now, and this is the Tennessee River, where there are a handful of restaurants and housing developments. The Tennessee River begins here in Knoxville. It’s headwaters are formed due to the confluence of the French Broad and Holston Rivers.

We’re at Gay Street, which is the main drag here in Knoxville. Along Gay Street are hotels, arts venues, shopping, and a ton of restaurants and bars.

Knoxville’s population is 170,000. There’s a lot of history here. Arguably the nation’s first electric streetcar ran right up the middle of this street way back in 1890. Mountain Dew had its beginnings in Knoxville. The channel HGTV is based here too. Country singer Kenny Chesney grew up here and director Quentin Tarantino was born here.

Here on the left is Knoxville’s market square, which has a number of restaurants and some shopping. This is where Knoxville has its farmers markets, musical acts, and the city puts in a temporary skating rink in the winter time.

On the north end of town is the more run down section of downtown called Old City. This is the sketchiest part of downtown Knoxville – home to the city’s main bus stop, train station and homeless shelter. There are a decent number of shops, restaurants and bars here, and this is where people go clubbing – typically starting at about 10 pm on Fridays and Saturdays.

Crime wise – it’s not pretty. Knoxville has been called one of the 50 least livable cities, because, while the downtown area might be charming and very safe, the outskirts are very poor and dangerous. Crime in Knoxville is 131% higher than other cities of its size. 1 in 4 people in Knoxville lives in poverty, almost double the national average.

For perspective, we’ll show you how quickly things change just a block or two east of downtown. The city of Knoxville has been working hard to gentrify and improve much of the greater Knoxville area by rebuilding older rundown homes in this part of town and building newer homes to appeal to younger, wealthier home owners. It’s a process that is ongoing here in Knoxville, and one we talked about a little more extensively in another video we did on the worst areas of Knoxville, where we drove through east Knoxville.

The link to that video is in the description.

For perspective on downtown, we’re going to jump to a clip on the south side of downtown, from where we will drive over the Tennessee River on the Gay Street Bridge and drive back into downtown from across the river.

Now, one more other particular area we covered was a section of the University of Tennessee, which is only two miles from downtown proper. This is what the locals call The Strip, and it’s a series of restaurants and bars where the college kids hang out. During football and basketball games, it can be quite busy here.

Leaving the strip, we head into campus proper. We’re going to show you two landmarks on campus – where the basketball team plays their games, and the campus’ football stadium. The University of Tennessee has about 28,000 students, which puts it just inside the top 50 in terms of largest attendance

Here on the left is the massive Thompson-Boling Arena where the mens and womens basketball teams play. This street is called Phillip Fulmer way. It was named after long-time football coach Phillip Fulmer. The stadium here in the middle of campus is called Neyland Stadium. It’s absolutely massive – and holds 102,000 people. It’s so large it’s hard to even get the entire thing in one frame.

That’s the end of our drive through the greater Knoxville downtown area. Hopefully this gave you some perspective on what Knoxville Tennessee is like.

Here’s the link to the bad Knoxville neighborhood video: https://www.youtube.com/watch?v=Z0jkcz8GOfA

Link to the Tennessee mountain town video in Pigeon Forge and Gatlinburg: https://www.youtube.com/watch?v=M-24orQTqAM

This channel talks about America, different states, education, travel, geography and what it’s like to live in different places in America.

Mappy: [email protected] He’ll do his best to answer your questions and fan mail.

More info on I drove through downtown Knoxville, Tennessee. This is what I saw.

I drove through downtown Knoxville, Tennessee. This is what I saw. - BingNews Search results