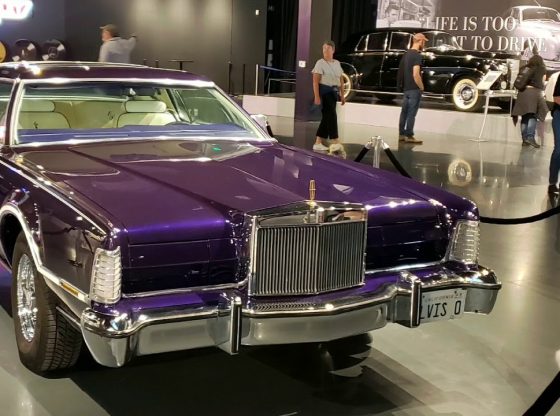 Elvis Presley loved to collect cars and motorcycles, not to mention customized jets, go-carts, dune buggies, and even a John Deere tractor.

At the Graceland Automobile Museum, Elvis fans, and lovers of fine automobiles can see more than 33 of his favorite vehicles and motorized toys.

The museum creates a tree-lined street where visitors can walk past a drive-in theatre, showing Elvis movies of course, and marvel at his car collection.

Some of the crowd-pleasers in the Elvis car museum include his Pink Cadillac, Stutz Blackhawks, a 1956 Cadillac Eldorado Convertible, a 1975 Dino Ferrari, and the red MG from Blue Hawaii.

Then there are his Harley Davidson Motorcycles, go-cart, dune buggy, motorized three-wheelers, and a pedal car.

New additions in 2009 include both of Elvis’ Rolls Royce sedans, his 6 door Mercedes Benz limousine, and the John Deere tractor he used at Graceland.

After marveling at the cars, there is the chance to step on board one of the more extraordinary airplanes in the world – Lisa Marie.

Elvis bought the Convair 880 jet from Delta Airlines in 1975 for $250,000. By the time he had finished refurbishing it using the same team that had previously customized Air Force One it had cost $600,000.

With gold plated seat belts, suede chairs and leather-covered tables in a luxurious living room, a private bedroom, and 24 karat gold-flecked sinks in the bathroom, it’s clear to see why Elvis used to call Lisa Marie his “flying Graceland”.

Then there is Elvis’ Lockheed JetStar, “Hound Dog II”. The smaller jet with its customized yellow and green interior was used for shorter trips and for ferrying Elvis’ manager, Colonel Parker around when Elvis went on tour.

The tours also include entry to Graceland Mansion and grounds, self-guided tours of the Elvis in Hollywood Exhibit, and more. A tour of the stables is also available. The most recent addition to the Graceland tours, the stable tours started in May 2009 and cost an extra $15.

Tours can sell out during special Elvis events, such as the Elvis Presley Birthday Celebrations in January, or Elvis Week in August, when it is recommended to book Graceland Tours in advance.

The 2010 Elvis Week will take place from the 10th to 16th of August when up to 10,000 Elvis impersonators stage free and paid concerts around Memphis, and a candlelight vigil is held at Graceland.

When the tours have finished, there is a chance for Elvis fans to continue their Graceland experience at the nearby Heartbreak Hotel which features Elvis themed suites and a non-stop Elvis television channel.

Visitors may then want to catch one of the free shuttle buses to Sun Studio where they can step into the studio where Elvis recorded his first five records, and the legend began.