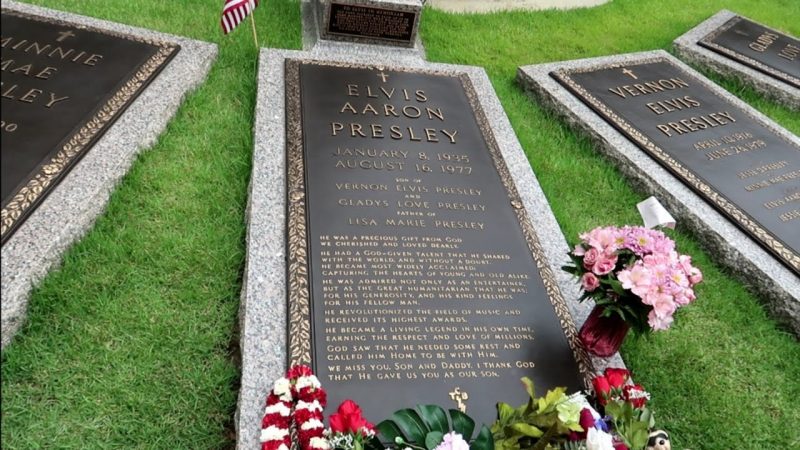 One of the most visited graves in the world, Elvis Presley’s final resting place is open for fans to pay their respects for free every morning.

Every year, more than half a million people visit Elvis’ Grave at Graceland, in Memphis, Tennessee. As well as being one of the most powerful moments in the official Graceland tour, everyday fans are allowed to walk up to the grave for free before the tours begin.

After dying at 42 years of age on the 16th of August 1977, Elvis was buried in Forest Hill Cemetery, Memphis. However after his tomb was tampered with, his estate decided to exhume his remains and change Elvis’ final resting place to the Meditation Gardens at Graceland.

When Elvis was alive, the Meditation Gardens was one of his favorite places to spend his time. Originally designed by the architect Bernard Grenadier, the gardens offered Elvis solace and a place to go and ponder any problems. Today, they offer Elvis fans and other tourists the chance to not only think about Elvis’ life but also their own life and the world they live in.

Other Members of Presley Family Buried Near Elvis’ Grave

When Elvis’ grave was moved to Graceland, the family decided to also move his mother, Gladys’ grave. Her remains and her original headstone can also be found in Graceland’s Meditation Gardens.

Elvis’ father Vernon and grandmother Minnie Mae Hood Presley’s graves can be found in the Meditation Garden. There is also a grave marker in memory of Elvis’ twin brother Jesse Garon, who is buried in an unmarked grave in Tupelo, Mississippi.

Elvis fans visit Memphis to pay their respects to the King of Rock and Roll year-round, but the two busiest times of the year are during his birthday every January, and at the annual Elvis Week celebrations in August.

One of the most popular and beautiful moments of the week is the Candlelight Vigil to Elvis’ gravesite. The eternal flame that burns beside Elvis’ grave is used to light torches that are then carried to the thousands of assembled fans and used to light their candles.

Fans then walk by the light of their candles single file through Graceland, and past Elvis’ grave. The date of the Elvis Week Candlelight vigil may change from year to year, but it starts every time at 8.30 pm and continues into the early hours of the morning to make sure no fan is left behind.

Controversy Over Whether the Wrong Name is on Elvis’ Grave

No matter what Elvis’ estate may say, there are still some who believe the King is alive and well, and that his death was faked. Some conspiracy theorists point at the spelling on Elvis’ grave, claiming that Elvis’ middle name has been deliberately misspelled, as it is not his final resting place.

When he was born, Elvis’ parents named him Elvis Aron Presley, with one ‘a’. It’s believed the unusual spelling was a tribute to his stillborn identical twin, Jesse Garon Presley.

The team at Elvis Presley Enterprises explains that later in life, Elvis wanted to change Aron to the more biblical and traditional Aaron. It was then that he discovered that while his original birth records had him listed as Elvis Aron Presley, in the official state records he was recorded as Aaron.

How to See Where Elvis Is Buried for Free

To allow Elvis’ fans to have the chance to pay their respects without having to pay money, his estate opens the Meditation Garden for free-admission walk-up visits. Visitors can walk up for free between 7.30am and 8.30am every day, after which the area becomes part of the official Graceland Mansion Tours.

During special Elvis celebrations, free nightly walk-ups can be added to the schedule. But for those visiting for the first time, it would be a shame to only visit Elvis’ grave when the Graceland Tour has so much to share about his extraordinary life.