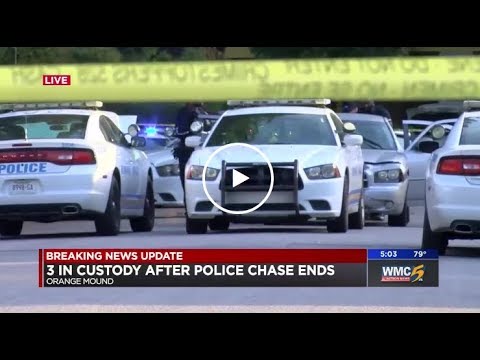 MEMPHIS, TN (WMC) – Memphis police confirm three people are in custody at Barron and Baltimore in Orange Mound after a chase.
That chase took officers on and off the interstate across the city.
Witnesses said an undercover white police vehicle rammed the light grey car of the suspect to end the chase.
Witnesses also said the people in the car and threw a bag out of it that they would describe as a backpack.
Officials said according to preliminary investigation, the suspects were in a stolen silver Dodge Charger and were wanted on additional charges.
People in the Orange Mound neighborhood where it ended watched the scene unfold in amazement.
They also said it was dangerous when the suspects drove at high speed through their neighborhood.
“I heard all the sirens pas by and heard a boom, that white car it rammed the back of the car and I seen them pull the two guys out,” said witness Adele Curtis.
A woman who did not want to be identified was waiting in front of Melrose High to pick up her child.
“The gray car came flying past, 20 to 25 police behind,” she said. “He threw the black bag out of the car and they chased them around this way.”
The woman says the suspects in the gray Charger were going about 80 miles per hour.
“The police was going a lot slower than the guys,” she said.
Neighbors stood and watched the scene for hours as police investigated.
Debra Davis showed up because relatives told her 16-year-old grandson was in the stolen car.
“They called me and told me Momma come on. Your grandson is in a high-speed chase with some more fellas,” Davis said. “He ain’t never been to jail in his life.”
When the Charger was towed, you could see damage on the front end and the back windshield broken out.
Police have three people in custody from the chase. At this point we do not know what was in the bag that was thrown out of the car or exactly why the chase began.